Anyways, Bugsy, or Bugger as it was lovingly called had two stooges. Bugsee and Bugyou. Whenever Bugsee would come, Bugsy would play the bugle and shout “Bugz aila, Bugz aila!”. We never understood why. Bugger that it was. Bugyou was well, as the name suggests bugged everyone. Maybe we should call it Bugger too!

So, Bugsy wanted to have a team of bugs, who apart from doing other meaningless things like scrounge around, scavenge for food, run here and there without getting caught, would also bug. Bugsee and Bugyou were asked to lug the bugs around in their quest for bugginess. Most of the bugs knew what kind of bugginess they need to bring to the team. They were well-trained bugs. All the bugs wanted different kind of bugs on the team – some flies, some insects, some winged ones and some crawlers. This was, so that different kinds of food could be attacked. But Bugsy and its two stooges wanted same kind of food from the same place. Bugsy knew nothing of how to scavenge for food and what all kinds of food were available.

Very soon the food dried up. Bugs started overturning and falling on their backs. Soon, Flit and Baygon spray started choking them. It was suffocating. It was painful. It was basically, bugging. 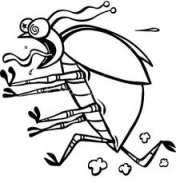 But the bug stopped with Bugsy. Even Bugsee and Bugyou would pass the bug to Bugsy. Bugsy never understood anything of what the team of bugs should be doing. But yet it had the ABS. The Anti-Bug Stopper.

And so all the bugs remained as bugs. Bloody bugging bell!

That day the bugs realized one very important thing about the world of bugginess and the 2 kinds of bugs that exist.

One  bug that understands what it does not manage.

And the other bug that does not understand what it manages.

And there is a third bug too. The inexplicable bug. The one that runs through idle brains and produces posts such as this one.

…and there is no Baygon spray for this.

P.S. : Some of you buggers might feel that this post is a premeditated, carefully thought out direct result of the previous one where Google apparently did not have any answer to my question of “What do I do now”.

Yes. You are right.

A discombobulated earthling..trying to find some purpose in the chaos around..I think I have a sense for humour..and at this point, I feel I should write something funny, but strangely I cannot! View all posts by caniwrite

This site uses Akismet to reduce spam. Learn how your comment data is processed.