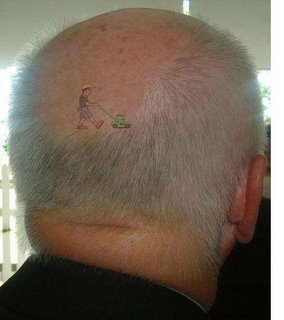 I feel nice. Not because somedody’s mowing down the hair. I am trying to grow mine – a new year resolution – need to give the hair oil industry a boost!

If somebody were to ask me, how’s life?..i would say, “life’s looking up”…not that, I am lying on the floor right now….but it’s one of those light-headed moments when you feel like leaning back on the chair, put your feet on the desk, and look outside the window into the open…mind you, I am feeling light-headed, and it’s got nothing to do with the picture…I am really trying to grow my hair…It’s a nice feeling…though, I cannot do any of those.

I don’t want to put my feet up…feels like I am a government official (without the pan, and the toothpick though!!)…and pan refers to the betel leaves..not PAN, pliss!!….Ok, I know you got that..dont have to pick a tooth on that…err, I mean, pick a fight!…

I cannot look out of the window….because there is no window near my cubicle…

Anyways…I am not sure why I am rambling about.A movie on my blog would probably be called ” Ramble in the Blongx”……..

But I guess it’s got something to do with Bangalore’s weather…or should I say Bengalooru’s weatheruu!…first it was Kolkata, then Mumbai, Chennai and now Bengalooru…very soon, I would be saying I am working in Motoroolu..one of my friends works in SAP…he would have to say, I work in SAPPU..sounds like soppu!!…(btw, I wonder if this name changing has got something to do with pappu…”pappu pass ho gaya” – remember?)….

Pappu might have inspired the name, but cut to brass tacks – the potholes are anyways going to be of the same diameter, traffic and bottlenecks will remain good sleeping partners, and IT will rule the roostu!..But we can be sure of one thing – boiled beans will be in abundance from now on – Bengalooru means boiled beans….But whats in a name anyways?….just letters and vowels…it’s not going to change mindsets……although, there are different names for TV Sets!……(intelligent joke eh?)…

Well, talking of mindsets, one metro still holds first place right up there…or should I say, right behind there – Chennai…was reading an article a few days back about CVMs – Condom Vending Machines. Chennai had decided to install CVMs in public places such as malls and theatres, to increase awareness about safe sex – the state had reported maximum number of AIDs cases as on March 2005 – 48,180…Noble intentions…but, a few religious parties there seem to think, that fear of God and not use of condoms, would help prevent this disease.

If you were lying on the hospital bed, with IVs and medication all over your body, and you’re counting your last few days before you kick the bucket (with due respect to a good friend of mine who shares this name!!), would you think about the temples you did not visit and the rituals you missed, or would you be thinking about the 3 Rupees you did not want to spend?

Isn’t fear of AIDs itself a big factor in deciding to have safe sex? They say that its hypocritical – we preach one-man-one-woman relationships, and on the other hand we ask them to use condoms!!..not on the hand literally, if you know what I mean…..They probably want to imply that if you are a faithful husband, you should / need not use condoms, and If you are not, you should start fearing God!!…..the concept of family planning is probably alien to these people…or maybe religious tourism is at an all time low in TN!!…

Speaking of family planning, one of the members of a prominent religio – political party had commented that every Hindu should give birth to 3 children….Why?…Because the Hindu population is in danger of getting extinct to the so-called fanatic religions prevalent in the country!!…….Napolean had commented, “There is no place in a fanatic’s head where reason can enter” – burning down an Archies showroom on Valentine’s day and hauling up couples into Police vans doesn’t really count for very reasonable behaviour, does it?

Btw, I don’t understood, if Hindus are in danger, why only 3….Something to do with numerology..or is there a connection to the protest against CVMs?…interesting eh?

Anyways.I do not know why I have gone on a commentary like this…I like to think I am not opinionated…but a friend recently commented to me (amidst a debate we were having), that I should start to keep opinions….and that got me thinking. I was confused, ’cause, most of us pass judgments or conclusions in the name of “having an opinion”.

I do not know which is better. Rather I would say, the question “which is better” is in itself flawed, because it has got nothing to do with the character, per se. It’s more of a personality ethic – How he/she sees or doesn’t see the world around him/her. I believe there’s a fine line between forming an opinion and forming a conclusion – the same line which divides objectivity from everything else.

I am yet to find out whether I “have an opinion” or ” I conclude”….

And having said that, I suppose, I should conclude this spiel, and put to an end to your torture!…

OK!…thats it…I am not going to spoil your Friday any more….

Read this somewhere:
If somebody exclaims on a Thursday ” T.G.I.F” (Thank God It’s Friday), ask them to calm down and say S.H.I.T (Shit Honey, It’s Thursday!)…….

It is the tata!

A discombobulated earthling..trying to find some purpose in the chaos around..I think I have a sense for humour..and at this point, I feel I should write something funny, but strangely I cannot! View all posts by caniwrite

This site uses Akismet to reduce spam. Learn how your comment data is processed.